Fanaticism and the Eskimo Pie 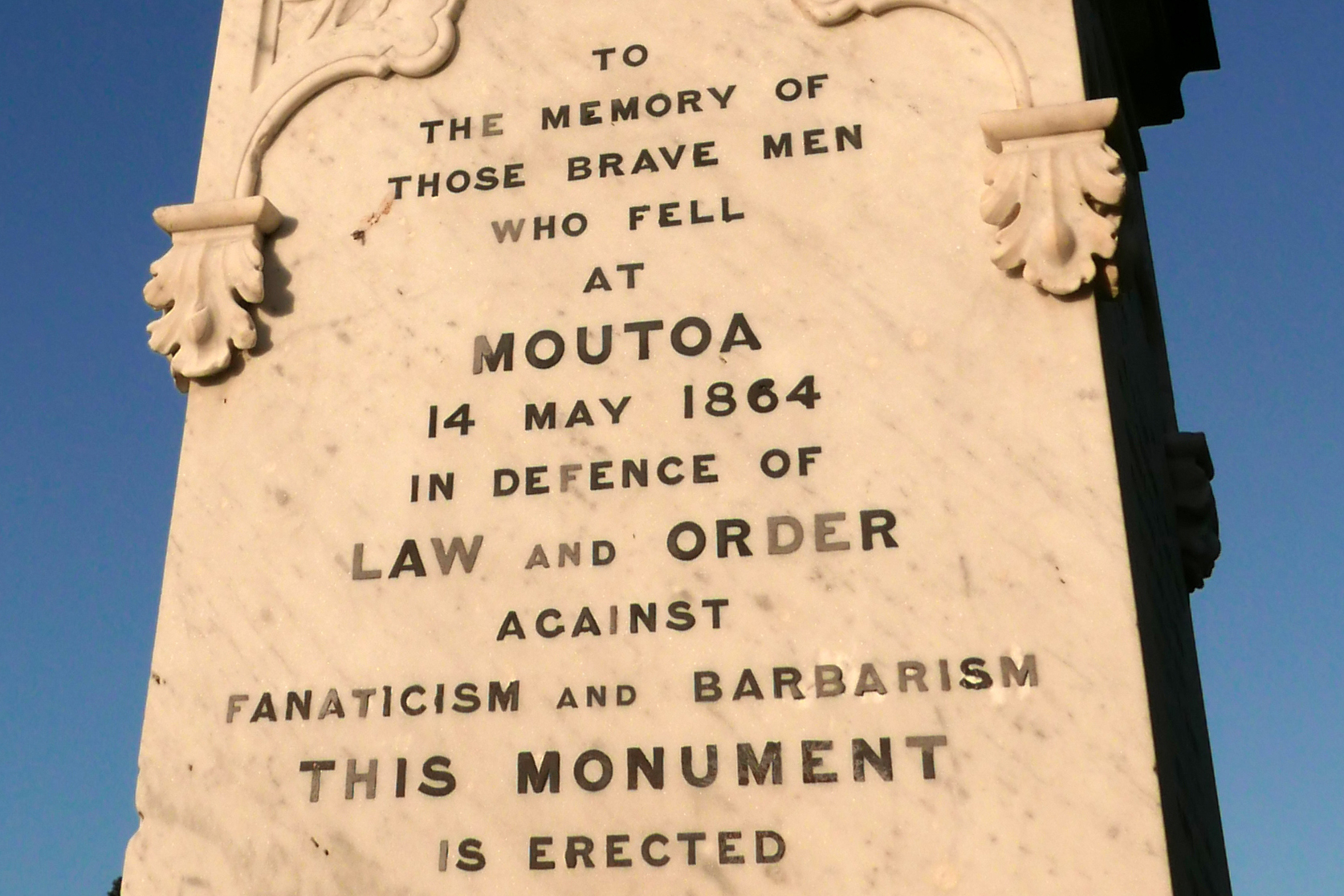 The memorial at Moutoa Gardens, Whanganui, “acts in the present day to affirm one group and disaffirm another, which it labels in extremist language”.

The current protests over names and statues isn’t about erasing history, writes Kennedy Warne. They’re awakening us to a side of history that’s been ignored and suppressed.

Globalisation sent a virus around the world in the blink of an eye. Black Lives Matter sent a viral idea — a reckoning on race — just as far, just as fast. BLM is said to be the largest protest movement in US history. Its cultural and political ripples have been felt in Aotearoa, not least in a renewed scrutiny of place names, building names, monuments and memorials.

The Captain Cook pub in Dunedin was recently renamed “Dive,” James Cook having become culturally compromised in the eyes of many as the forerunner of colonisation. And the Bully Hayes restaurant in Akaroa is seeking suggestions for a new name, as the owner no longer wants to perpetuate an association with the Pacific’s most notorious slave trader.

Brands have come under review, too. The venerable Eskimo Pie will soon melt away into the archives of former trade names. Invented in 1920 in the US, the famous frozen confection has been made in New Zealand since 1924 — our oldest brand of ice-cream. Tip Top, the current New Zealand manufacturer, has said it will drop the brand following a decision by the current US owner to do the same.

It’s taken them a while to catch up with changing attitudes. A political body representing Inuit peoples decided more than 40 years ago to abandon the word, which, like “negro” or “coloured,” had become a generic and derogatory label.

Curiously, Topsy — essentially an Eskimo Pie on a stick — has so far survived the cull. It was originally marketed, like Eskimo Pie, with a cartoon illustration of a child — in Topsy’s case a pigtailed pickaninny representing a character in the widely deplored Uncle Tom’s Cabin, from which the brand name derives.

Tip Top dropped the illustration from the wrapper some time ago but kept the name, perhaps deciding that the phrase “growing like Topsy” — a line uttered in the book — was in sufficiently wide use to mask the racial stereotyping.

It may seem trivial to talk about ice cream. Those who have no taste for considering the dynamics of racial offence are quick to mock such reckonings as the spurious obsessions of the politically correct. Likewise, calls to remove monuments and statues that portray a one-sided view of history (the side of the powerful) are dismissed as attempts to “erase history.”

Our own deputy prime minister has claimed that the re-evaluation and removal of monuments here is a “wave of idiocy” that merely mimics “mindless actions imported from overseas”.

Adoption of an idea whose time has come is no more mimicry than the coronavirus we battle is an imitation of the overseas variety.

As for erasing history, not so. Protesters are doing the opposite. They’re awakening us to history — to a side of history that’s been ignored and suppressed. History is the narratives we tell about the past. This current work of re-evaluation makes visible a history that’s been invisible. It invites us to have an honest, unfiltered encounter with the past.

In any case, to say that removing a statue such as that of Captain John Hamilton from the city that bears his name represents an obliteration of history ignores the ongoing contemporary message such edifices keep sending. 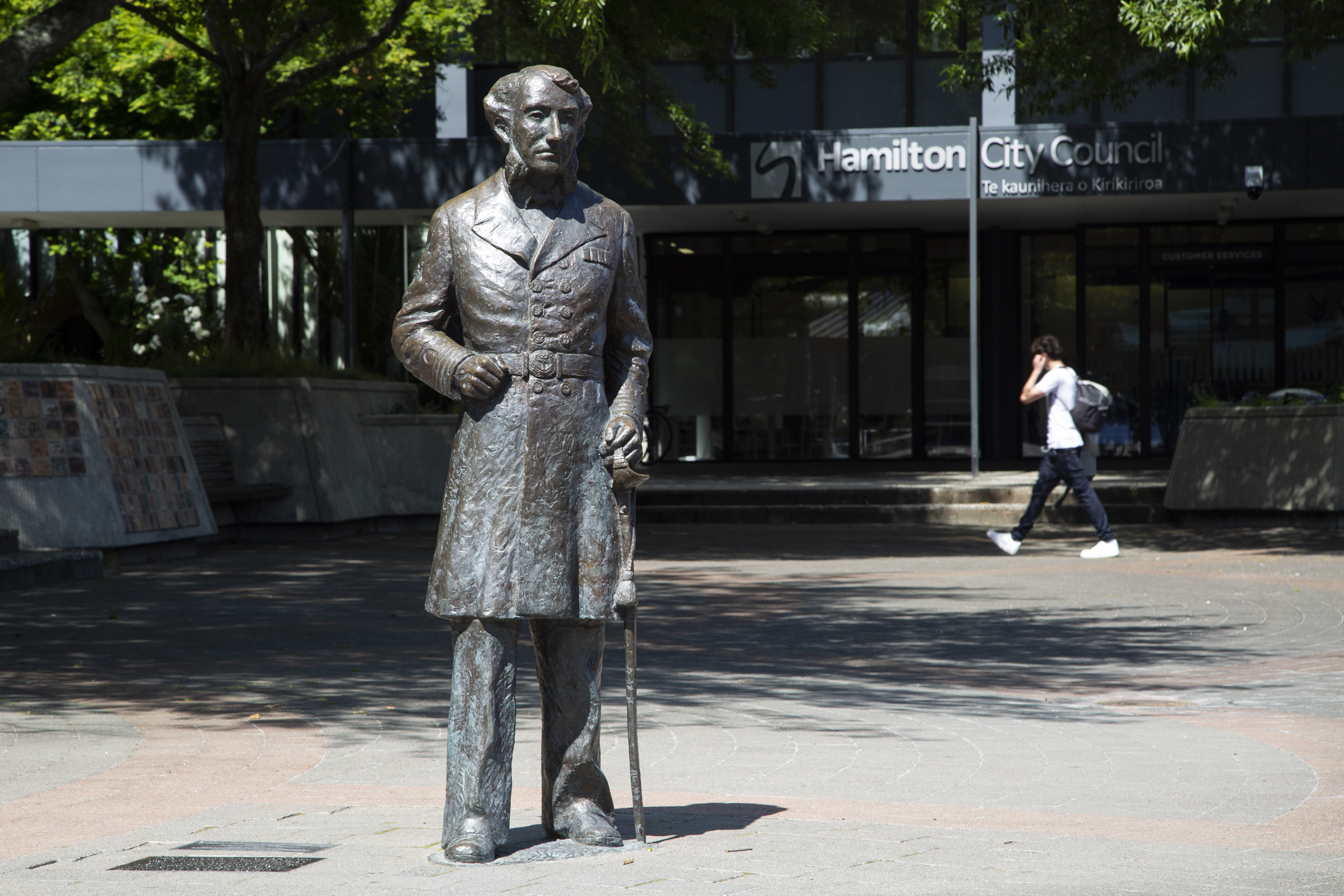 The statue of Captain John Hamilton which was removed by the Hamilton City Council on June 12, 2020. (Photo: Cornell Tukiri © 25 November 2019.)

Monuments, memorials, flags, street names, building names and the like are not merely a record of something that happened, or someone who took part. They’re often an affirmation, even a glorification, of a certain way of thinking about what happened. They normalise one understanding of the past and marginalise another.

I remember the first time I saw this monument, in 2018, while researching a story on the Whanganui River. Its blunt, provocative inscription, endorsing the triumph of “law and order” over “fanaticism and barbarism” struck me as an emphatically one-sided story. That’s because its purpose was never to serve as an objective statement of history but as a pointed lesson to any Māori who might have the temerity to question colonial supremacy.

The monument honours 15 kūpapa (Māori fighting on the government side) and one European who were killed at Moutoa Island, 80 kilometres upriver, on 14 May 1864, in a violent confrontation with Pai Mārire fighters, also known as Hauhau. Fifty Pai Mārire died in the exchange.

The monument was erected little more than a month after the battle, to convey a message to the “friendly natives at Wanganui” that loyalty to the state would be rewarded, and spur them to ongoing efforts to crush the insurrection of those who saw what was happening in the country through a different lens — “fanaticism and barbarism” being very much in the eye of the beholder.

Yes, the monument was erected as a show of gratitude, but also to foster compliance with European agendas. A line was being drawn — in marble — between goodies and baddies. On the one side loyal, friendly natives who sided with the colonial project, on the other “treacherous, plundering, murdering” tribes who opposed it. The monument acts in the present day to affirm one group and disaffirm another, which it labels in extremist language.

The upper portion of the monument is a weeping woman, a personification of grief. To what extent do disenfranchised Māori — including descendants of those 50 Pai Mārire who lost their lives — experience a very different kind of grief from the one envisaged by the sponsors of the memorial? A grief that persists in the labelling of their tūpuna as “barbarians and fanatics.” The monument may be made of stone, but it speaks, and its speech hurts.

And this is why seemingly trivial actions such as ending an offensive ice cream brand — or more substantive acts like removing a statue — matter. And it’s why any of us in Aotearoa who value a just society should welcome the chance to take part in this moment of reckoning. 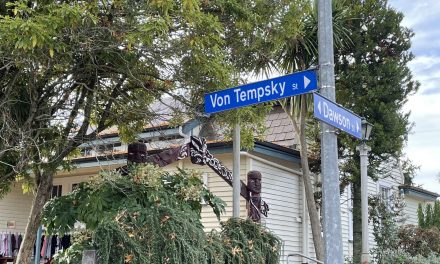 The pain and anguish of a street name 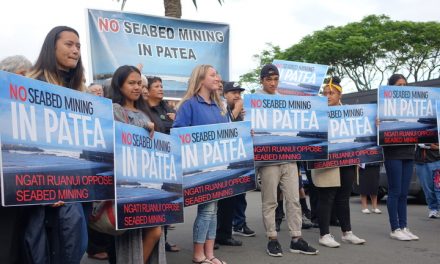 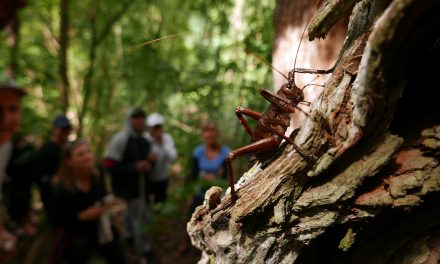 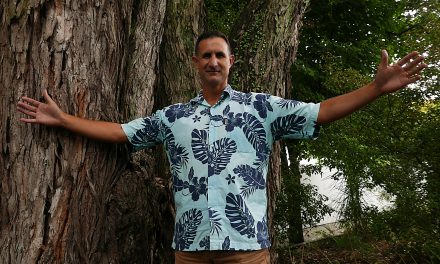