A trail of tears and a moment of joy 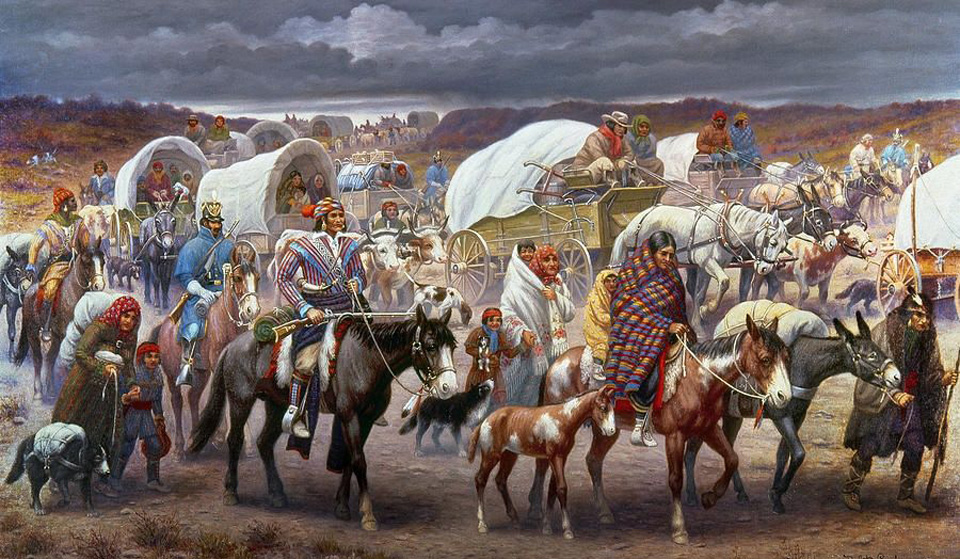 The Trail of Tears as painted by Robert Lindneux in 1942. More than 60,000 Native Americans were forced to leave their ancestral lands and travel to reservations thousands of miles away.

In a landmark decision, the United States Supreme Court has affirmed the rights of Native Americans in Oklahoma. The decision means that much of Oklahoma is a reservation that was promised to the Creek Nation in an 1866 treaty.

“On the far end of the Trail of Tears was a promise.”

So begins a remarkable decision delivered by the US Supreme Court last week that has stunned Native American communities for its forceful defence of their rights.

The promise was a secure homeland for the Creek Nation. It was made in a treaty the Creek leaders signed with the United States government in 1866, and it followed one of the most deplorable acts in US history: the brutal removal of some 60,000 Native Americans from their ancestral lands to reservations thousands of kilometres away — a genocidal event that came to be known as the Trail of Tears.

An estimated 15,000 Creek people were among those who made an indescribable 8,000-kilometre journey from their traditional homelands in the south-eastern United States across the Mississippi River into what is now Oklahoma. A third of the Creek Nation died along the way from disease, exposure and starvation.

In exchange for giving up their homelands (not that they had a choice), the Creeks were guaranteed not just a permanent home, “secure forever,” but also the “unrestricted right of self-government” with “full jurisdiction” over tribal members and their property.

In last week’s decision, the United States’ highest court has declared that because of the treaty the Creeks signed, their land remains their sovereign possession, and the jurisdictional terms of the treaty must be honoured. Among those terms is that Creek individuals who fall foul of the law on reservation land must face justice in tribal or federal courts, not state ones.

The case was fiercely fought. In terms reminiscent of the claim that the Treaty of Waitangi was a “simple nullity,” the state of Oklahoma argued that the treaty of 1866 was no longer relevant. History had sidelined it. The Creek’s rights of self-government had been so diminished by state and federal interference that the reservation itself had become effectively disestablished.

Justice Neil Gorsuch, writing for the majority of the Supreme Court justices, declared otherwise. “Today we are asked whether the land these treaties promised remains an Indian reservation for purposes of federal criminal law,” Gorsuch wrote. “Because Congress has not said otherwise, we hold the government to its word.”

And, with that, the political tectonic plates in a nation that has systematically marginalised its indigenous people, shifted a fraction.

When US poet laureate Joy Harjo — herself a member of the Creek Nation — heard the decision, she froze “in disbelief and shock”, she wrote this week. “How could any Native tribal nation win any decision with this conservative Supreme Court? And at a time in American history like this when justice seemed so imperilled?”

Native Americans have long felt alienated and invisible. If Black lives have only recently been seen to matter, Native American lives are barely even recognised.

Some years ago, a series of posters featuring close-up photographs of Native American leaders in their traditional regalia was printed, each carrying the line: “We are still here.” What must it be like, I thought, to have to conduct a publicity campaign to remind people of your very existence?

And what must it be like for Native Americans to live with the fact that the only time their existence is mentioned in America’s founding document, the Declaration of Independence, it is as “merciless Indian savages.”

Hated at the start, crushed by the steamroller of colonisation, rendered aliens in their own land, recognition has been a long time coming. The Oklahoma decision brings it incrementally closer.

Joy Harjo, who is Oklahoma-born, writes in words that will resonate with Aotearoa’s indigenous people about the slow workings of justice: “The elders, the Old Ones, always believed that in the end, there would be justice for those who cared for and who had not forgotten the original teachings, rooted in a relationship with the land. I could still hear their voices as we sat out on the porch later that evening when it cooled down. Justice is sometimes seven generations away, or even more. And it is inevitable.”

Though the scope of the Oklahoma decision itself is narrow — a determination as to which institutions have the right to try criminal cases involving Creek tribal members on their own land — the implications are broad.

Justice Gorsuch demolished arguments made by the state of Oklahoma. One of these was of the “possession is nine tenths of the law” variety. Because the state had for so long acted contrary to the Creeks’ self-government guarantee — effectively ignoring it — the guarantee was meaningless and should be set aside.

Gorsuch wrote: “The persistent if unspoken message here seems to be that we should be taken by the ‘practical advantages’ of ignoring the written law. How much easier it would be, after all, to let the State proceed as it has always assumed it might. But just imagine what it would mean to indulge that path.

“A State exercises jurisdiction over Native Americans with such persistence that the practice seems normal. Indian landowners lose their titles by fraud or otherwise in sufficient volume that no one remembers whose land it once was.

“All this continues for long enough that a reservation that was once beyond doubt becomes questionable, and then even farfetched. Sprinkle in a few predictions here, some contestable commentary there, and the job is done, a reservation is disestablished.

“None of these moves would be permitted in any other area of statutory interpretation, and there is no reason why they should be permitted here. That would be the rule of the strong, not the rule of law . . . Oklahoma asks us to defer to its usual practices instead of federal law, something we will not and may never do.”

Oklahoma also used the argument of utility. If the court dared to recognise that the Creek reservation was never disestablished, then that precedent could be used by other tribes to vindicate similar treaty promises. “Ultimately, Oklahoma fears that perhaps as much as half its land and roughly 1.8 million of its residents could wind up within Indian country,” wrote Gorsuch.

Then, with dark irony, he added: “Oklahoma reports that recognizing the existence of the Creek Reservation . . . might potentially trigger a variety of federal civil statutes and rules, including ones making the region eligible for assistance with homeland security, historical preservation, schools, highways, roads, primary care clinics, housing assistance, nutritional programs, disability programs, and more.

“But what are we to make of this? Some may find developments like these unwelcome, but from what we are told others may celebrate them.”

Gorsuch ended his decision with words that should give hope to all who struggle for justice, over decades, over generations, who are so ground down by the process that they are tempted to abandon their cause.

“The federal government promised the Creek a reservation in perpetuity. Over time, Congress has diminished that reservation . . . [but has never withdrawn it]. As a result, many of the arguments before us today follow a sadly familiar pattern. Yes, promises were made, but the price of keeping them has become too great, so now we should just cast a blind eye.

“We reject that thinking. If Congress wishes to withdraw its promises, it must say so. Unlawful acts, performed long enough and with sufficient vigour, are never enough to amend the law. To hold otherwise would be to elevate the most brazen and longstanding injustices over the law, both rewarding wrong and failing those in the right.”

Let those words ring in all our ears.