The New Zealand delegation at the UN in 2010, when New Zealand endorsed the United Nations Declaration on the Rights of Indigenous Peoples in 2010. (Photo: Broddi Sigurdarson/UNPFII.)

Many Māori were involved in the drafting of the United Nations Declaration on the Rights of Indigenous Peoples (UNDRIP) — and fought alongside other Indigenous Peoples for its ratification, in the face of constant belittling and obstructiveness by the governments of particularly New Zealand, Canada, the US, and Australia.

One of those on the frontline was Moana Jackson, who was elected chair of the Indigenous People’s caucus at the UN in 1990.

Here, Moana looks back on the history of the Declaration, and at why the recent attacks on UNDRIP are “not just ill-informed but dangerously provocative”.

The struggle for human rights has never been easy. The current but hardly new debates about “special” or “privileged” Māori rights are another example of how the struggle can be redefined in misguided political race-baiting.

The recent calls from some right wing ideologues that New Zealand withdraw from the United Nations Declaration on the Rights of Indigenous Peoples (UNDRIP) is the most extreme example of that race talk.

It illustrates how, in countries with a history of dispossessing Indigenous Peoples, the struggle for human rights can be especially difficult, even when the so-called liberal democracies that grew out of colonisation profess commitment to human rights ideals. For the very history of colonisation has been shaped by the belief that some humans were less human than others.

In fact, in many cases it has been shaped by the belief that Indigenous Peoples were not really human at all and could be dispossessed because they were primitives and ape-like savages. Or, as Rudyard Kipling once wrote, they were “others” who were “fluttered folk and wild/Half devil and half child.”

New Zealand has not been immune from that process. Māori, too, were often described as savages trapped in some violent state of nature who could be rescued and civilised by the colonisers.

Fear not New Zealander we do not come
With hostile feelings but with all good will . . .
Too long indeed in darkness have ye pined
Rejoice we come your fetters to unbind . . .

It is that background which makes the talk about UNDRIP not just ill-informed but dangerously provocative. It displays an ignorant dismissiveness about the belief among Indigenous Peoples that an international human rights instrument might overcome that history and restore some recognition of their humanness.

It also misunderstands the purpose of the whole human rights discourse and the need to ensure that all peoples are offered its protection. It does not confer special rights but seeks to outline rights which have been historically violated.

Its drafting was motivated by the same imperatives that led to the other human rights instruments. For example, the Convention on the Elimination of Discrimination Against Women (CEDAW) does not advocate “special” rights for women. Rather, it seeks to remedy centuries of patriarchal oppression which denied women any meaningful rights at all.

The fact that women in many countries still face that oppression, and that women in New Zealand, especially Māori women, still suffer greater disparities in health and wealth, is evidence of the Convention’s ongoing relevance.

Similarly, the Convention on the Rights of Persons with Disabilities does not confer “special” rights. Rather, it acknowledges the need for changes in policy and public attitude so that people with disabilities can enjoy the same rights as everyone else.

The fact that people with disabilities, and especially Māori, still struggle with questions of access, and sometimes even acceptance, is also evidence of its importance.

The idea of UNDRIP was first promoted by Indigenous advocates in the 1970s and followed a long history of international advocacy.

Rangatira, for example, had regularly travelled overseas after 1840 to protest about the Crown not honouring the Treaty, including a visit to Geneva as the site of the then League of Nations in the 1920s.

Those early attempts were rejected by the governments in the League. However, in 1985, enough governments in the United Nations finally agreed to the drafting of a Declaration by establishing a Working Group on the Rights of Indigenous Peoples (WGIP).

Ironically, the Declaration was to be drafted in Geneva where the previous attempts to remedy the denial of Indigenous human rights had been rejected.

Māori people played an important role in that process which has often not been properly acknowledged. Nganeko Minhinnick, her brother Alec Kaihau and his daughter Aroha were the first to participate with a small group that included Aroha Mead and Joe Williams.

More Māori attended all of the subsequent meetings of WGIP, and every year respected kaumātua and kuia such as Erihapeti Murchie, Archie Taiaroa, and my Aunty Pauline Tangiora accompanied the delegations.

Ngāti Awa, for example, supported Aroha Mead and others to attend, including in 1993 when a delegation tabled the Mataatua Declaration on the Cultural and Intellectual Property Rights of Indigenous Peoples. That declaration was developed when Ngāti Awa hosted the first international conference on Indigenous cultural and intellectual property rights.

By that time, hundreds of Indigenous Peoples from around the world were travelling to Geneva each year. They brought the histories of their own human rights struggles and their own battles against colonisation.

Oppression never defined their indigeneity but it was the common experience which united them in their resolve to have a declaration reaffirming their humanity.

The drafting process was both difficult and frustrating. Many governments actively opposed the Declaration and often invented fatuous legal arguments to justify their opposition.

They never resorted to the old characterisation of Indigenous non-humanity but instead argued about whether Indigenous Peoples were actually the kind of “peoples” in whom rights might vest in international law.

The governments of New Zealand, Canada, the United States and Australia regularly promoted those sorts of arguments while claiming to support the aspirations of Indigenous Peoples.

The New Zealand representatives often referred to the Treaty of Waitangi as the source of partnership and Māori rights. However, they never acknowledged how successive governments had diminished the status of the Treaty and compelled Māori to seek some international recognition after 1840. Neither did they ever acknowledge that Māori rights predated the Treaty, which merely reaffirmed them.

The most contentious proposal in the Declaration for governments was the demand by Indigenous Peoples that it reaffirm their right to self-determination.

The whole history of human rights was based on the idea that all peoples have the right to self-determination. It is the base from which all other rights flow. If Indigenous Peoples were denied that right, then their very existence as free peoples was again being dismissed. They were still not quite human.

Some countries tried to get around the issue by hedging the right with so many reservations it effectively became meaningless. Some argued that it only applied to individual rights and not the collective nature of rights as understood by Indigenous Peoples.

Others even argued that, in the Declaration, self-determination could not have the meaning it normally had in international law. It was somehow a lesser right when it applied to Indigenous Peoples.

The frustrating nature of the debates was always sadly complicated by the costs that were carried by the Indigenous Peoples who participated. The costs were not just financial. Some Indigenous participants were “disappeared” by their governments when they returned home.

Yet the degree of Indigenous resilience never wavered and there was considerable celebration when the drafting was completed. For Māori people, the jubilation was delayed because New Zealand, Canada, the United States and Australia were the only four states that opposed the Declaration in its final form.

One of the rangatira who travelled to Geneva in the 1920s had remarked that: “The halls of this Palace are not yet ready to hear our voices” — and nothing seemed to have changed.

A new generation of Māori people nevertheless began to work on international human rights issues. Claire Charters, Tracey Whare, Moana Sinclair, and Catherine Davis were among many who became articulate advocates for the Declaration.

In 2010, the government finally accepted the Declaration but tried to diminish its importance by saying it was only an “aspirational” document. Yet all human rights are aspirational — many women still do not enjoy their full rights, but CEDAW proclaims their right to do so.

It’s against that backdrop of struggle that the current allegations of “special” Māori rights have been politicised. It is also the history that is unknown or deliberately rejected by those who call for “an end to UNDRIP”.

They not only ignore the very real disparities still suffered by Māori and other Indigenous Peoples which the Declaration tries to address. They also dismiss the terrible costs that have been paid in the drafting of the Declaration, and in doing so besmirch the memory of those who were killed while trying to ensure its passage.

Representatives of the Kanaka Māoli people from Hawai‘i were among the most committed supporters of the Declaration. At one Indigenous caucus meeting in Geneva, one of their group read a poem by Haunani-Kay Trask which perhaps best sums up why Indigenous Peoples advocated so strongly for UNDRIP:

I lament the black
And naked past, a million ghosts
Laid out across the ocean floor . . .
Who talks of those
Disinterred, their
Ground up bones, their
Poisoned eyes?

The Declaration tries to answer those questions which in varying degrees are about the dispossession of all Indigenous Peoples, including Māori. It’s disappointing and insultingly offensive that some seem to think the Declaration can just be dismissed as unimportant and divisive.

However, it’s heartening that the government is at last seeking ways to give effect to the Declaration.

Unfortunately, the comments opposing it, and the objections to the publication of He Puapua, which outlined one possible course of action, don’t bode well for the kind of success which recognises that Māori are not just the “subjects” of a colonising state.

Too many politicians still see advantage in portraying any idea of Māori rights as “special” and a threat to democracy as they know it. But their idea of democracy was spawned in the racist non-democracy of colonisation, and the Treaty promised something better.

UNDRIP also promises something better, and it expects states to honour that promise. That is its challenge, not its threat.

Moana Jackson is Ngāti Kahungunu, Ngāti Porou, and Rongomaiwahine. Moana likes telling stories to, and for, his mokopuna and hopes they will grow up in a land where Te Tiriti is finally seen as the base for respectful political relationships. Then there will be other stories to tell. 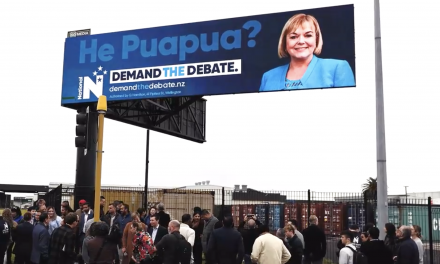