A brand-new princess of colour – is it black and white? 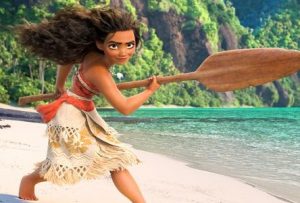 OMG. Did they really just say that?

“Moana is a Polynesian adventurer, and she sounds awesome,” says the director, John Musker (The Little Mermaid, The Princess and the Frog, Aladdin). “She is indomitable, passionate and a dreamer with a unique connection to the ocean itself.”

Sounds like every Moana I’ve ever met, male and female. But something about the Disney announcement sparked a personal flashback.

In 2002, I was unwittingly caught up in a trademark dispute over my name. Half-way through a 36-gig tour across Europe, our distributor Pirate Records was threatened with a 100,000 Euro lawsuit for releasing my self-titled album into Europe. Turned out the name Moana had been trademarked by a German media company for over 40 items including CDs, soaps, fantasy toys and anything made out of cardboard or paper. Silly me had breached the trademark registration by releasing an album under my own name.

German lawyers to Pirate Records declared the media company was simply exercising their legal right as owners of the trademark. They said we didn’t have a leg to stand on. Ridiculous. Time to call on my feisty Maori legal mates, I thought.

The mates were blunt: “You don’t have a leg to stand on.”

Cue a crash course in IP. The Western intellectual property system was “set up to allow creators, or owners, of patents, trademarks or copyrighted works to benefit from their own work or investment in a creation.” The IP system is basically about the commodification of products that spring from your thinking or knowledge.

The funny thing is that, under this system, it’s okay for individuals or companies to harvest images, words, songs etc from native cultures if they are “in the public domain.”

That’s despite the wee fact that such cultural icons sprang from the intellect of Maori ancestors and iwi for example. And somehow it’s legally okay for companies to trademark indigenous words, symbols etc and use them without ever engaging with indigenous communities about whether the usage is appropriate, let alone welcome.

The reality is companies around the world are constantly on the lookout for something new (exotic, ancient, unique) to help them brand their product in the marketplace. Disney is just the latest one. It’s been described by some as simply another wave of colonisation.

While making a documentary called Guarding the Family Silver, Toby Mills (my husband) and I interviewed representatives of some companies to find out why they helped themselves to Maori words and designs.

Lego, a Danish company, used words like tohunga and whenua for a range of “Bionicles.” Sony Playstation worked with designers who created a male Polynesian Conan-esque Warrior for the “Mark of Kri.” And Ford Motors incorporated moko designs onto their 2001 Ford F-150 Lightning Rod Concept Truck.

“Once we got into Māori culture, we realised there was also strength and there was the whole concept of warriors that were behind it and we thought: ‘Wow. That has an awful lot to do with what our trucks really mean,’” That came from Patrick Schiavone, Design Director, Ford USA.

And he said that with a straight face.

Jay Beard (Bottlerocket Productions) admitted all the white, Nordic looking heroes had been done to death. “What we really liked about Maori tradition and Maori art was the tattoos and markings and we felt that when you put those onto a warrior, he immediately looked tougher and more serious.”

Yeah … except when that animated, taiaha-wielding male Maori warrior was wearing a chin moko reserved solely for females.

Despite their fascination with Maori culture, neither Lego nor Ford Motors thought about contacting a real live Maori. Bottlerocket Productions ignored advice from members of Maori theatre group Kahurangi, who just happened to be in the neighborhood anyway.

Moana Jackson, who is especially perceptive about all manner of Maori legal issues, has a different take on these IP matters. He says: “I think the arguments which multi-national companies advance in order to justify their use of indigenous symbols and so on are a lie. You can’t celebrate the beauty of something unless you are prepared to celebrate the people to whom it belongs.”

Given there is no formal mechanism in place to facilitate engagement between companies and Maori, let alone protocols of enforcement, it’s a hell of a big ask for any Maori consultant or advisor to represent Maori integrity when dealing with big companies where big money is involved. Who is to say that a particular Maori individual or group has the skills, right or mandate to represent a Maori reality?

Then again, who among us has the skills, the right, and the mandate to say they don’t? Who draws the line between creative licence and cultural authenticity? Where is that line anyway? Is my reality as a Maori the same as your Maori reality? Will my head fall off if I keep asking these questions?

Hang on. Where is the Crown in all this? You know, that’s the crew who signed a Treaty with our ancestors.

The WAI 262 claim was lodged by six iwi 23 years ago. Hearings were conducted from the late 1990s and concluded in 2007 during which the claim asserted a failure on the part of the Crown to adequately protect Maori interests in relation to cultural knowledge and practices. Shamefully but predictably, the Government has ignored the 2011 Waitangi Tribunal report.

Maui Solomon is the clued up lawyer who represented Tai Tokerau claimants. His view? “There are no national or international guidelines in place to govern ethical conduct around use/access of indigenous IP or traditional knowledge. There should be and it is something argued for strongly in Wai 262.”

The fact is that some companies are using our special stuff to sell their stuff.

No doubt some of Disney’s excitement about Moana can be attributed to the predicted awesome sound of ‘ching-ching’ at the box office from Hollywood to Honolulu to Bluff and everywhere in between. Frozen pulled in over 1.5 billion dollars for Disney. What chance might there be of a little trickle-down for Pacific peoples?

Toby asked the Bottlerocket CEO if they might consider establishing a scholarship or offering an internship to young Maori designers and game makers with funding from the profits of the Playstation game. “Couldn’t you help grow a young Maori into the industry by mentoring someone who belongs to this culture?”

‘We couldn’t possibly do that.’

So that’s a no, then? Love the culture, just not the people.

It’s not that Maori are fundamentalists when it comes to our culture being commercialised either.

Here’s Maui Solomon again: “Maori said to Lego that actually, if you use the knowledge, symbols or language this way, you could end up with a better product, a product that is promoting Maori culture in way we are comfortable with and we get to share some benefit in that too because this is our knowledge, our culture that you are using to promote your product to an international market.”

You would assume that Disney learned from the Pocahontas debacle not to use historical figures again. Hopefully they also learned to step back from storylines that reinforce unhelpful stereotypes to define indigenous peoples as well as women.

What’s more, there is a Maori involved and we do move in packs. No Maori is an island. Taika Waititi is a leading Maori creative who refuses to be pigeonholed by a film industry that expects Maori filmmakers to perform in a certain way. He’s got to deal with Maori expectations of him too. You can only wonder at the freedom enjoyed by your ordinary, average Pakeha filmmaker.

An article from Bustle pointed out that Moana could be Disney’s chance to present diversity in cultural representation and to make complex characters as opposed to stereotypical ones. And not be a mish mash of all the various cultures throughout the Pacific, thereby missing the boat completely.

“This is their chance,” says Bustle, “to give Polynesian children around the world the representation they’ve always wanted and a princess that they can root for in a story they can love enough to watch over and over. This is their chance to start putting their history of on-screen racial insensitivity behind them.”

The truth is I’d love to take my six year-old to a movie with all the bells and entertaining whistles where the fictional female hero is a strong, intelligent and articulate Polynesian girl who doesn’t look like a brown Barbie-doll. It would be great if our lead isn’t rescued by a white bloke. Like many of her friends, cousins and our Pasifika relations, my baby is bilingual, proud of her ancestry and connected to her culture. She understands her place in the universe. She is a real-life, modern-day adventurer, having accompanied her mother’s band on nearly every tour of duty.

Yes, animated adventures are indeed fantasies. Yes, they are pure entertainment. Yes, it’s Disney and they have a dodgy track record. And yes, it’s all about profit at the end of the day. However, working with indigenous creatives from the cultures that inspire such stories, is an opportunity to produce a win-win situation for designers, indigenous peoples and audiences.

My hope is that little princesses across the Pacific will not only be entertained by the Disney Moana but their sense of self will be reinforced by a fantasy that reflects something of who they are in real life. And that they will be inspired to write and produce great stories and films… themselves.

Imagine that a company approaches you about an idea to use Maori knowledge or motifs on its product. What kind of process or mechanism do you think should be in place to help sort it out?