The flickering genius of the artistic spirit 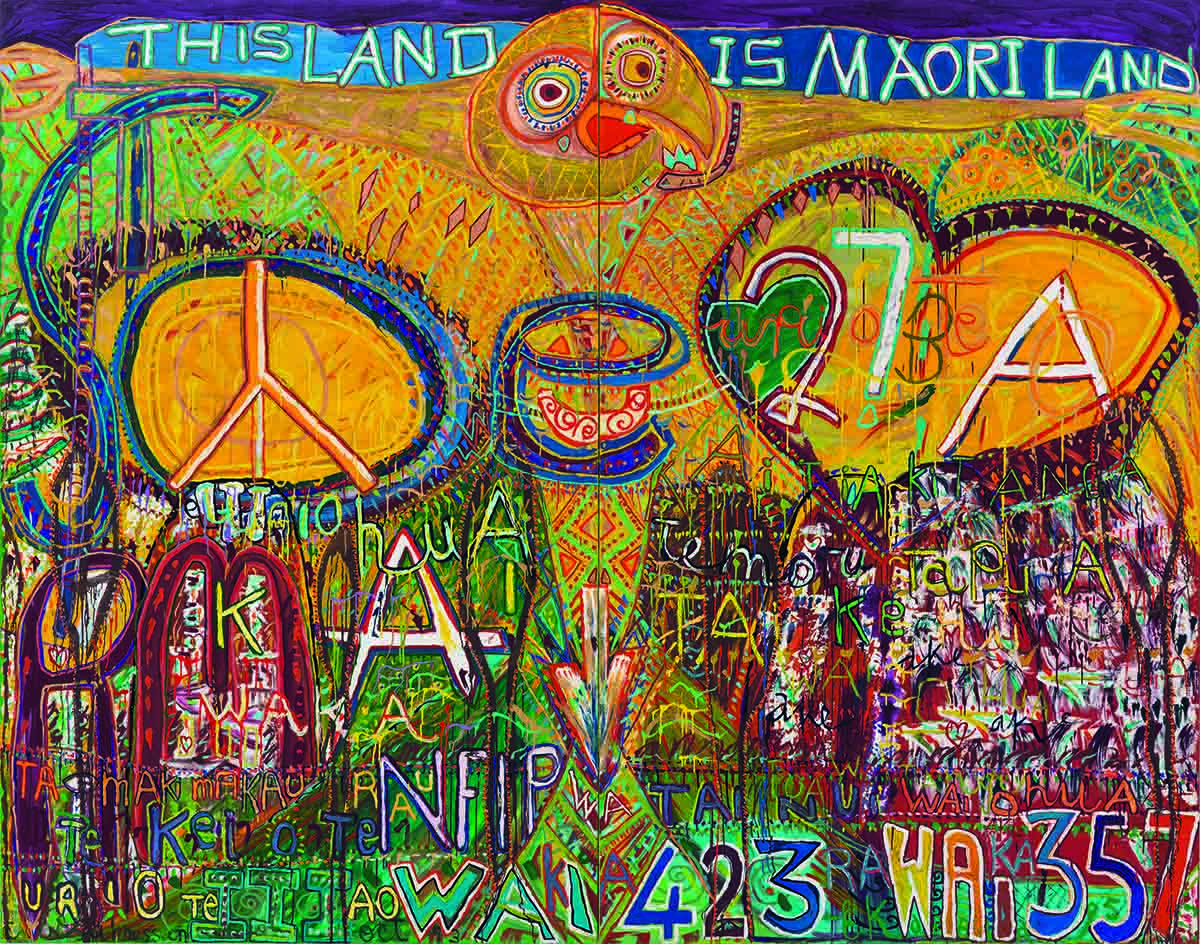 When I reviewed Auckland Art Gallery’s Toi Tū Toi Ora: Contemporary Māori Art exhibition in April last year, I described it as a mind-opening experience. The 300-work exhibition, spanning seven decades of art-making by 110 artists, was an invitation to a wānanga on Māori cosmology and worldview. In its assertion and provocation, it also felt as if a cultural bombshell had landed in the venerable central city institution.

Now the experience of that landmark exhibition can be enjoyed in book form. Auckland Art Gallery has teamed with Penguin Books to present a 400-page volume featuring more than 200 of the exhibition’s works with accompanying interpretation, along with a discerning history of contemporary Māori art by curator Nigel Borrell.

A foreword by Moana Jackson — “The Art of Having Faith in Ourselves” — gives deep insight into the Māori art-making thought and process.

“The Māori intellectual tradition is a navigational one,” he writes, “forged in journeys across the Pacific that looked back to Rangiātea, while longing to know what lay beyond that distant point where the earth met the sky. It has always been a daring, as well as imaginative, tradition propelled by both a longing to explore and the confidence that has come from the stories told in this land.”

Moana invites us to place ourselves imaginatively in a voyaging waka, surrounded by the intimacy of whānau and the familiar realities of ocean and sky, but always attuned to the horizon and the unknown. You paddle or set sail in confident expectation that the new world will come to you.

At the exhibition, I recalled a space in the gallery devoted to voyaging. In total darkness, gleaming steel panels simulated starlight guiding navigators across the moana in Israel Tangaroa Birch’s installation Ara-i-te-uru. Evoking taniwha who exist between the realms of Te Pō and Te Ao Mārama, the work hinted at how we all navigate the realms of darkness and light.

The pare, or lintel, in John Walsh’s “Pare To My Place”, is a gateway, “signifying the relationship between an individual and the land, the lived and the underworld.” (Photo supplied)

This way of seeing is profoundly refreshing — a place of imagined possibility where anything is possible. “Just as whakapapa itself is a series of never-ending beginnings, in which new life always eases the sorrow of death, so the possibilities of the imagination could also be infinite,” Moana writes.

As well as being a medium for exploration, Māori art has always been an expression of what it meant to belong to this land, he continues. “It was an articulation of what people hold most dear when they are safe and free at home — a sense of faith in themselves and a belief that they can determine their own destiny.”

Colonisation and its contemporary manifestations devastates that faith. It takes away the freedom to imagine. It strikes at the heart of a people’s impulse to explore, to discover, to transcend. Moana argues that it is a dispossession worse than loss of land, language or lore.

“What is often [not] acknowledged is the fact that colonisation is more than just the stealing of land or the dishonouring of an agreement. It is a much broader process of dispossession that includes attacks on the spirit as well as the very substance of what it means to be at home — it limits possibility and takes away the confidence and freedom to imagine the new.”

It’s hard to hold to the “quiet space of limitless possibility” when violence and oppression are so intently limiting all that Māori can be, Moana says. Yet the traditions of Indigenous creativity give great cause for hope.

Moana gives a vivid example. At wānanga established soon after the landing of the Tākitimu waka, nearby vents of natural gas were lit whenever the wānanga was in session. The fires were lit to indicate “the preciousness of knowledge and the sometimes flickering genius of the intellectual and artistic spirit,” he writes.

The creative fire may have flickered over the years, but the sense I had at the exhibition — and now, reading the book — is that it is kindling afresh, and with force. 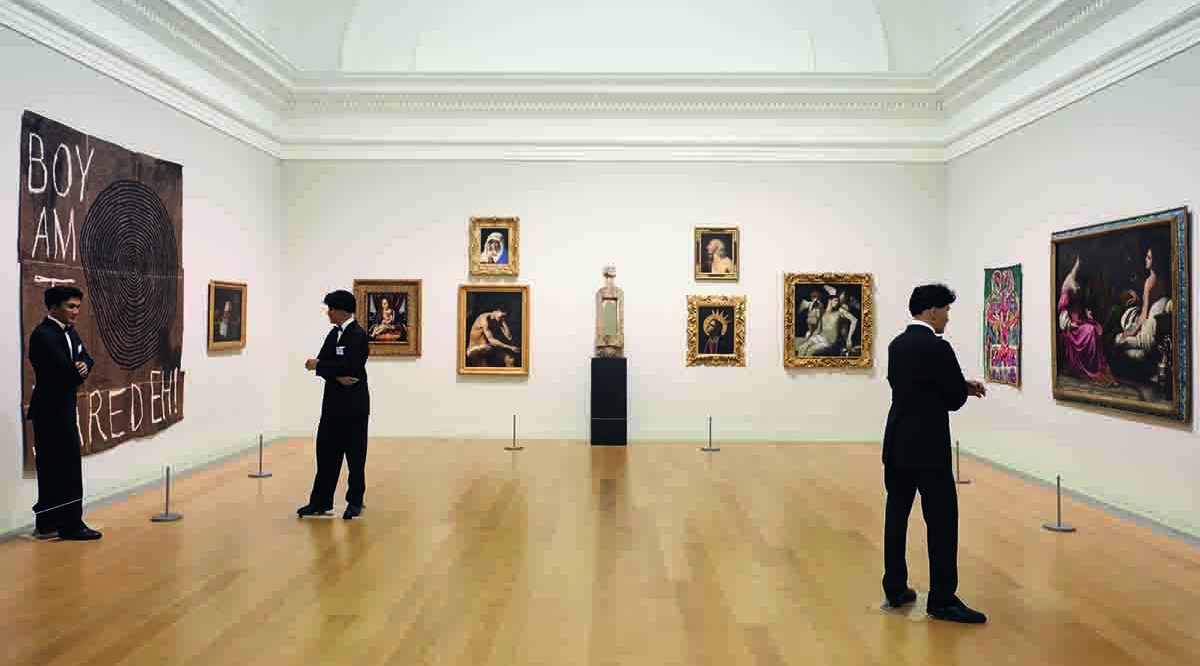 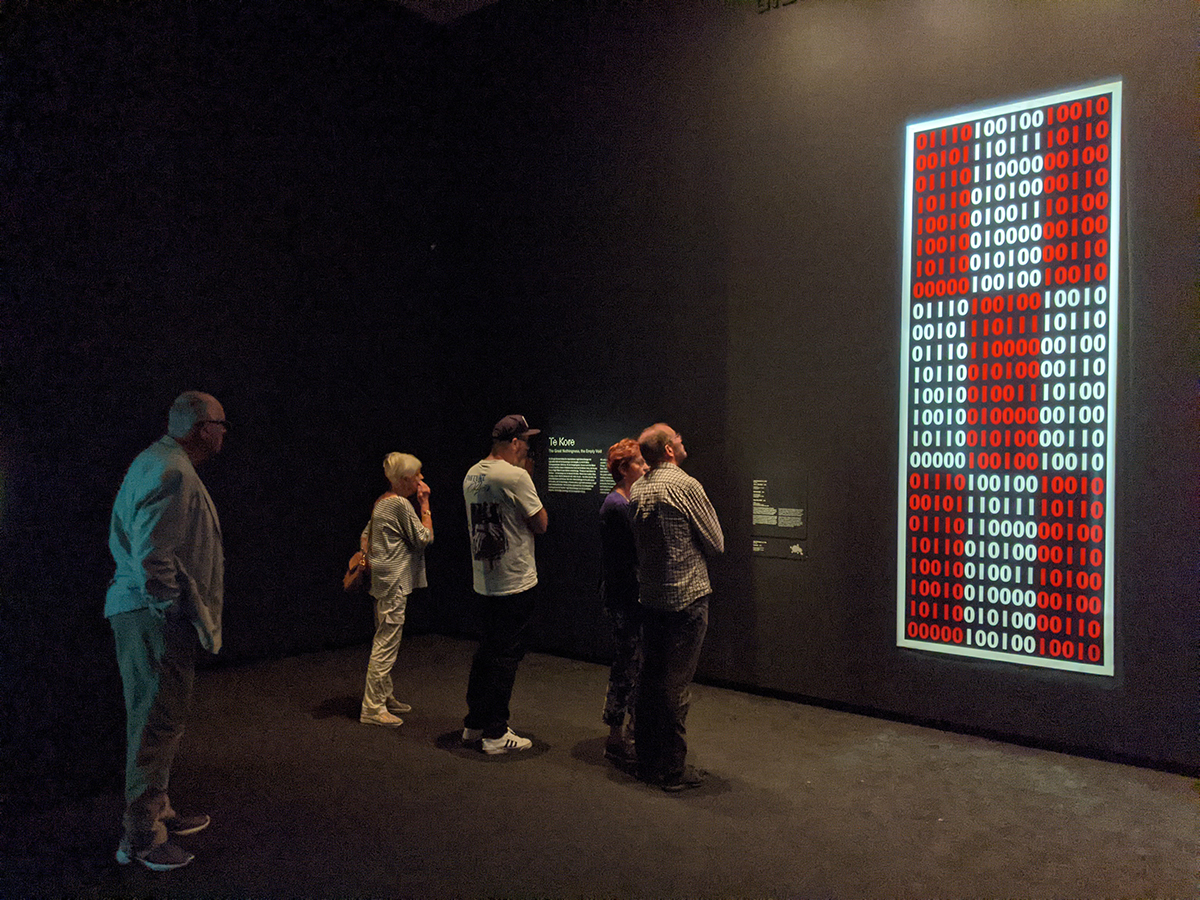 Nigel Borrell, curator of Toi Tū Toi Ora, takes up that theme, and others, in his overview of contemporary Māori art. His recognition of the centrality of whakapapa was a striking feature of the exhibition, and he discusses it in the book.

“At the core of any expression of Māori art is an assertion of whakapapa, of genealogical connection: a connection to land; a connection to the physical and metaphysical or transcendent worlds that constitute a Māori worldview and understandings of the nature of being,” he writes.

As a result, “an examination of Māori art requires looking beyond any one particular time in its history or development. Concentrating on a particular period in Māori art would negate the continuity of Māori culture, which, like the art itself, consists of innovation and adaptation.”

That, indeed, was the genius of Toi Tū Toi Ora. In its curation, it enacted whakapapa. It was about connections and connectedness across time and space.

As Nigel Borrell writes: “Māori culture celebrates the place that enduring art traditions play in the lives of people. These living traditions are seen in the work of Māori artists throughout time. They continue to inspire today, with the creations of contemporary makers connecting to a legacy of ancestral knowledge, technical skill and understanding of material.”

He issues a warning, however. Unless there is committed engagement, traditions can be lost. He cites a whakataukī that was a guiding theme for the exhibition:

For him, the whakataukī “poses an aspiration and a challenge to see a future in which Māori art continues to toi tū, stand tall, and toi ora, stand healthy, reinforcing the knowledge and the ideas that empower Māori and Indigenous ways of knowing. As the whakataukī alludes, without this, we risk being inactive and indeterminate among a plethora of competing ideologies and the decentring, dominant cultural structures and systems.” 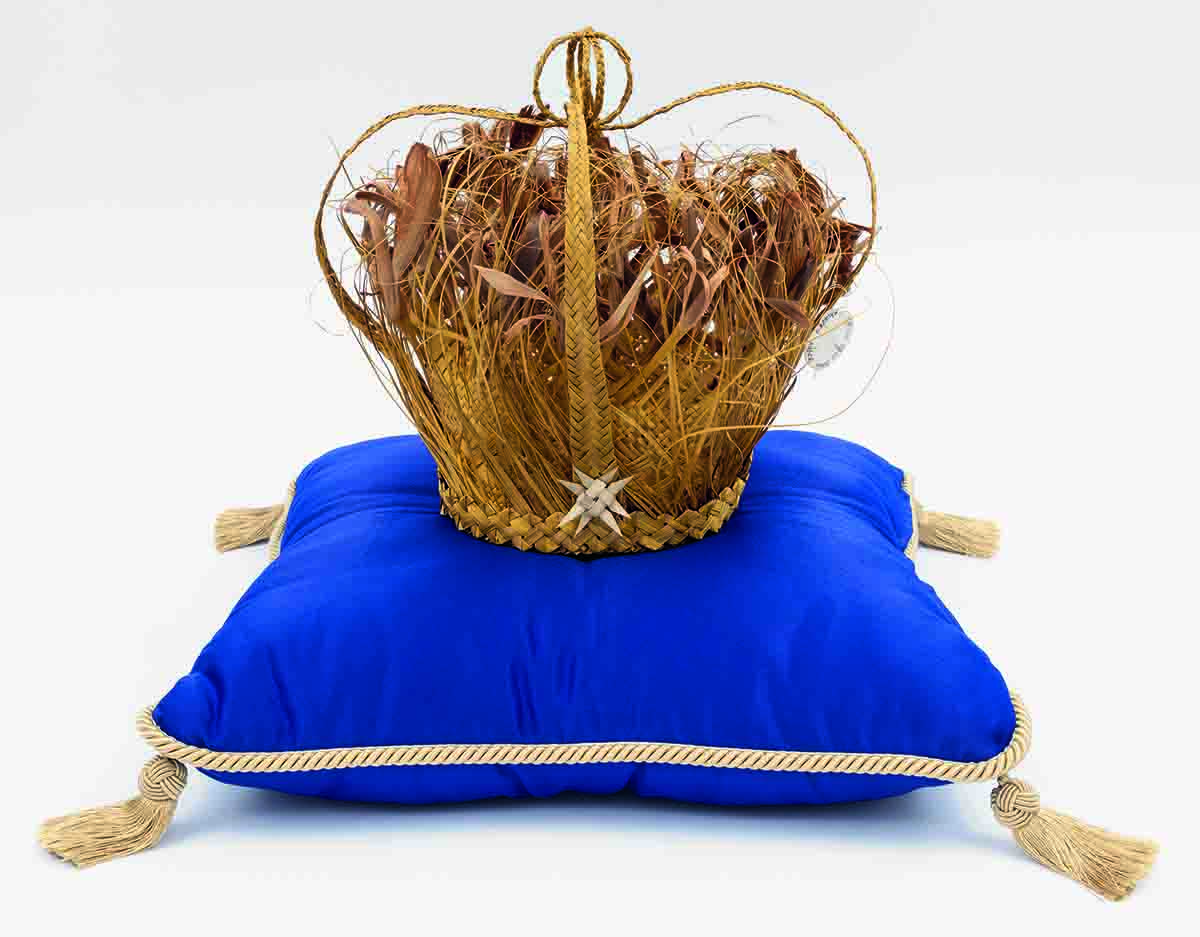 “Crown grab”, Maureen Lander’s Crown Grab Bag compares one treasure — pingao — with another — gold, inviting a consideration of where true value lies, invoked by the symbol of “the Crown”. Māori art is often in the business of “speaking back” to the dominant culture, and this was a feature of the exhibition. I remember being struck by the placement of some art in a gallery space filled with traditional European paintings. The indigenous was confronting the introduced. It felt like an altercation.

Nigel Borrell has much to say about rethinking relationships to power in the art context. “Colonisation and its hegemony, or cultural and political rule, exercises the power to define,” he writes. “This is present in how we define knowledge, how we define science, how we define time and how we define art. This publication is engaged in a process of revision. It advocates a Māori framework and knowledge base with which to consider the history of and future for Māori art.”

“Seen in this way,” he continues, “Māori art is not about identity as much as it is about its continuity in making visible the Māori intellectual tradition.”

He ends his discussion with the inspiring words of Irihapeti Ramsden:

“Our work as today’s version of Māori is the same as that of our tīpuna: to continue our story, to strengthen it accordingly to our times and to add the next chapter.”

That Nigel Borrell has contributed to adding that “next chapter” is indisputable. After the exhibition closed last year, the Arts Foundation Te Tumu Toi created an award especially to honour his work and influence, and to encourage others to follow in his footsteps. Called “A Moment in Time He Momo,” the award honours “a change-maker who has had a significant impact on our arts and cultural landscape”.

Nigel Borrell has gone from Auckland Art Gallery now to work at the Māori art space at the newly opened Hundertwasser Art Centre in Whangārei. Seeing the Puhi Ariki exhibition there is high on my to-do list.

Meantime, I’m wandering again through a mind-opening exhibition by turning the pages of this new book, drawn into a world of imaginative possibility.

As the book’s opening mihi from Helen Te Hira puts it:

The stories have been sewn together
The connections intertwined
The path created
And carved into the hearts of many. 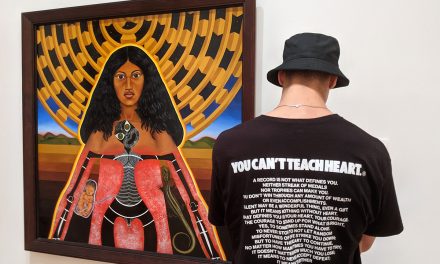