Moana’s music — cutting through the toe jams and slow jams 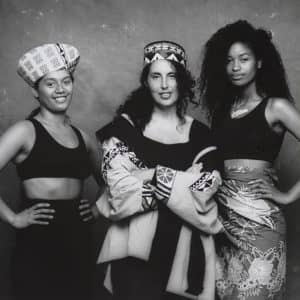 Moana and the Moa Hunters. Moana with Mina Ripia and Teremoana Rapley.

Julian Wilcox pays tribute to a musical hero, Moana Maniapoto, on her induction into the New Zealand Music Hall of Fame.

Imagine, if you will, this scene. A social at Te Aute College, in 1993, with around 10 girls’ schools given the “honour” of an invitation to attend, no doubt expecting a rollicking yet well-behaved occasion.

The venue, our college gym, was an alluring mix of worn-out sports equipment meets school assembly bleaches. The aroma could only be described as “toe jam with a hint of Janola”.

Of course, we had preened ourselves to tip-top shape for the occasion. Our brylcreamed high-top fade hairstyles, starter jackets, turtlenecks, and Origin jeans were nationally recognised. This sartorial elegance would be enhanced by a liberal application of aftershave from forehead to Doc Marten shoes.

A rigorous process was always undertaken at Te Aute to ensure we had everything necessary for a successful social gathering. That amounted to selecting a start time, kai time, and finishing time.

But of utmost importance was the music. A school social lived or died by the music the DJ played. In the 1990s, this usually consisted of reggae, New Jack Swing, Bob Marley, rap/hip-hop, Red Hot Chilli Peppers, UB40, anything by Guy, and the obligatory last 15 minutes of slow jams.

And, it pains me to say it now, but Māori music barely registered in the playlist. One could quite conceivably “running man” dance one’s way from Wreckx n Effect’s Rump Shaker, to Jade’s Don’t Walk Away Boy, and end up at Tony Toni Tone’s It feels good, without batting a tino rangatiratanga eyelid.

I could be wrong, but I’m pretty sure I had just wiped the floor with some unfortunate soul who had the braggadocio to start a dance-off. With Naughty by Nature’s O.P.P resounding, a well-executed running man, supplemented by some pops and locks, and a windmill for good measure, I was about to turn out the lights to signal the party was over for the 200 and something social attendees — when, out of nowhere, a song played.

But it remains ingrained in my consciousness because of the lyrics “kia kotahi rā, kia kotahi rā” and the fusion of electric dub, funk, soul, haka and poi that Moana Maniapoto crafted to shake 200 young Māori in a gym at Te Aute College.

I was no stranger to Māori music before 1993. I still remember my māmā bringing home her vinyl copy of Maranga ake ai by Aotearoa in 1984. Poi E meant a lot to a Māori boy who grew up listening to Lindsay Yeo and Buzz O Bumble on 2ZB. Herbs and Ardijah were some of my first music purchases, on tape. For an Upper Hutt boy, Upper Hutt Posse was a compulsory buy. And listening to the Māori radio station Te Ūpoko o Te Ika meant that I was a fan of Dread Beat and Blood, Southside of Bombay, Brannigan Kaa, and even Gifted and Brown, alongside many other kaupapa Māori bands, who remain musical heroes.

But, in the 1990s, rap/hip-hop and R&B culture exploded into the lives of Māori youth — whether they were in Auckland, Te Waipounamu, or in a gym at Te Aute College.

In the International Year of the World’s Indigenous Peoples — at a time when the Minister of Education, Lockwood Smith, had commissioned a report that led to the increase of tertiary education fees in New Zealand, and the country was considering which voting system it wanted for its future — I was reciting the lyrics for every song on the soundtrack to the movie Boomerang.

Kaupapa Māori has been fundamental to Moana Maniapoto and her music. She probably won’t like being called an icon or a legend, but she has been Māoridom’s staunchest advocate for reo Māori music, nationally and internationally. The music itself isn’t the only reason for the international recognition. Perhaps more important has been Moana’s indefatigable drive to prove to Aotearoa New Zealand the popularity of Māori music to the international market, and the relative neglect it faces at home.

By now, you may have noticed that I’m a bit of a fan. You’ll no doubt realise that I think Moana’s induction into the New Zealand Music Hall of Fame is thoroughly deserved. And I’m sure you’ll detect that it wasn’t just a social at the Te Aute College gym in 1993 that has led to these remarks.

To have one of our music heroes inducted into the Hall of Fame deserves greater recognition and further celebration than this small attempt. It represents more than just Moana and her music. It’s an acknowledgement that, without our music, and our musicians, New Zealand music has no unique marker in the world.

I love music. I love 1990s music. I especially love New Jack Swing music. But none of that music reflects me, or my language and culture, and my place in this world.

Moana Maniapoto presents the best of New Zealand music to the world. Her induction into the New Zealand Music Hall of Fame acknowledges this. But I hope it’s just the beginning of New Zealand giving full exposure and prominence to all Māori musicians and their music — to ensure that what they do continues to make the world of difference to people like me.