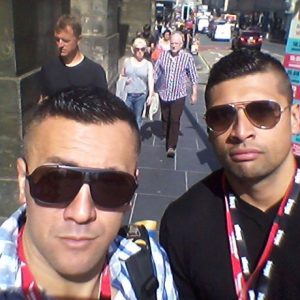 When this Māori was invited to perform at the Edinburgh Fringe Festival this year, I had barely any inkling of what the festival might be like – and no idea what our reception might be.

But, when we arrived at the airport in Edinburgh, even the customs officials were interested in where we were from and what type of show we were bringing.  It was a play called “Strange Resting Places” which I co-wrote with my Italiano mate, Paolo Rotondo, way back in 2007.

And the “resting places” refer to the graves in Italy of so many of our Māori soldiers from World War Two.

My co-actors Te Kohe Tuhaka and Barnie Duncan and I were chuffed to be on stage overseas, so we immediately switched into charm mode and pitched our show to the customs officers.

People were flying in from all over the world to take part in this festival and it was good to see that the buzz was starting before we’d even got out of the airport. I had no idea, at that stage, just how big the festival was. In fact, it was made up of 2,500 shows, events and exhibitions in 279 venues all across the city of Edinburgh. Some city too with architecture making me feel like I’d stepped into “Game of Thrones”. Castles, gothic cathedrals, churches, and cobble stone roads (minus the Lannisters).

But then it was on with our play, the three of us performing “Strange Resting Places” 26 times with only two days off over the course of four weeks — showcasing our Māori and Italiano story to a range of other ethnicities, as well as the local Scots, and perhaps providing many of them with their first taste of Māori culture.

The story has us playing 22 characters — Māori soldiers, Italian men and women, animals, and a German soldier, as well as Catholic priests and saints. And we use reo Māori, English, Italiano, German and Latin to help present the chaotic Italian environment around the Battle of Monte Cassino in 1943.

From six years of research, Paolo Rotondo and I had woven our show together, with the help of Italians who had fought with and against Maori and our Allies during that terrible battle, south of Rome, in World War Two. When we were doing the research, it took a while to gain the trust of those people.  But, in time, that trust came, their heart-felt and funny stories started affecting us, and that wairua began to permeate our mahi.

Many of the people who shared their personal stories with us have since passed, so when any of us perform “Strange Resting Places”, we do so with the pride and joy of those souls. The key elements were waiata in both Maori and Italiano and the humour we had in common. It was a reminder, if any was needed, just how music and laughter transcend language.

Te Kohe and I weren’t the only Māori in Edinburgh. We learned that when people began asking us if we were in the kapa haka show. When we told them we weren’t, interest in us waned.

So the pair of us eventually yielded to the temptation to say: “Yes. We are.” And we would direct them to our venue instead. Not sure it worked though.

Actually, it seemed as if Edinburgh had been taken over by Māori. Te Waka Huia and Te Whanau-a-Apanui were there too, performing a show, aptly named, “Haka”. But in the evening these top-level, flash practitioners were also representing Māori in the Edinburgh Military Tattoo.

That was a major and spectacular operation up on the hill. Māori moko designs lit up across the castle wall as our kapa haka reps poured through the mouth of the gate with taiaha and patu in hand and te reo ringing out around the grounds. Hairs on the back of my neck stood up. MĀORI!

After that, I took my cousins and sister to sample a comedy show “Calypso Nights”. (It’s all about variety, whānau.) Then I whisked them off to the festival bar to meet other New Zealand performers.

It became an evening celebrating Māori and Pacific Island achievements in the long month which was the festival. What was really awesome was having my whānau celebrate with me into the night. The next morning is another story . . . Aue!