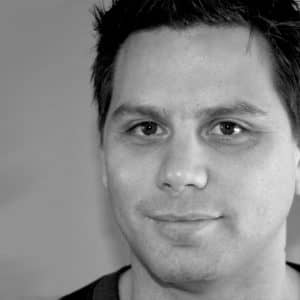 Kereama Taepa grew up with a foot in two worlds. As a kid, he didn’t really notice there was a difference. He moved between the homes of his Pākehā mum and his Māori dad, soaking up the creative influences in both. One of his earliest childhood memories is drawing stick figures at his nana’s kitchen table. Nana is Mavis Newland, a celebrated Wairarapa painter.

School holidays were spent in his dad’s workshop moulding pinch pots out of clay. At the time, his father, Wi Taepa, a renowned ceramic artist and teacher, was experimenting with new materials. A descendant of Te Arawa master carvers, Wi found his element when he picked up the clay. His sons, Kereama and Ngātai, were among his first students. Some days they were so engrossed in their work they forgot to eat.

It wasn’t until Kereama went to university to study Māori visual arts that he started to reflect on his bicultural identity. “I’ve always known I was Māori, but not everyone else does.” He puts that down to his pale skin and light-coloured eyes. “I can see people looking at me funny sometimes, and I know straight away what they’re thinking: ‘Why’s this white guy talking about Māori art?’”

It’s no surprise, then, that the enduring themes in Kereama’s work are all about identity and belonging. But, rather than focusing on the differences, Kereama’s art embraces both cultures. His latest exhibition at Pātaka, Whakapī, takes popular iconography from the Pākehā world and blends them with traditional representations from te ao Māori. 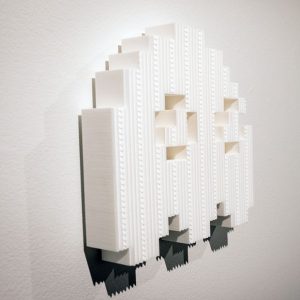 As you enter Whakapī, your eye immediately goes to those things that are familiar. For me, it was the Apple logo and the hungry-mouthed Pac-Man. On the opposite side of the room, wheku, the intricately carved faces of our tūpuna.

Standing on the periphery, it looks like two different and opposing worlds facing each other across a great divide. Which is, some days, exactly what it feels like to live in New Zealand.

But, when you cross the room to study the sculptures up close, all is not as it seems. On the surface of the icons, are hundreds of intricate step-like patterns that are not only regionally distinctive, they also speak of ancient stories. It’s not an icon — it’s a customary Māori carving in the shape of a Pac-Man.

On the other side of the room, the surface of the wheku have raised imprints of space invader figurines, iconic ships from Star Wars and ghosts pursued by Pac-Man. These too, are regionally distinctive, and tell well-known stories.

The interesting thing is, when we make judgments, we often talk about how we only look at the surface of things, as though the surface isn’t important. But Kereama’s Whakapī reminds us that the surface actually is important. The way people view us, and the judgments they make based on what they can see, is absolutely relevant.

Perhaps that’s the beauty of art. There’s a freedom to explore subjects that in politics, or social media, or even round the dinner table, can get heated. But stirring up controversy isn’t the driving force behind Kereama’s work. He just wants to reflect who we are, where we’ve come from, and the place we are now. That’s why his art often goes back to his childhood — growing up in the ‘80s playing basketball and spacies, watching cartoons like The Transformers and Ninja Turtles.

Kereama’s taha Māori influences have been his dad, of course, and his teacher at Te Aute, Mark Dashper. There’s also Professor Bob Jahnke, a leading Māori artist and sculptor. It was Bob who helped provide the inspiration for Whakapī. He introduced Kereama to the iconic carved figures of Te Āti Awa who are renowned for performing acts which are physically impossible but spiritually possible. These great legends defy the laws of physics and speak of a different realm — which is where the virtual reality aspect of Whakapī comes in. 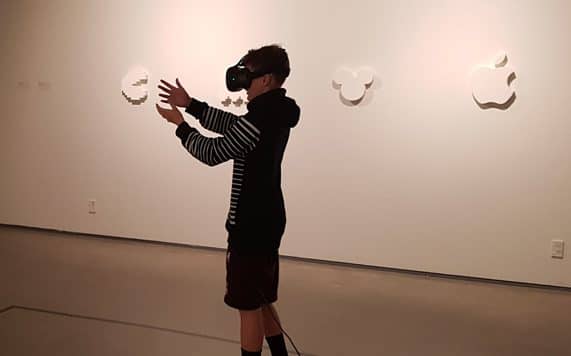 Slip on the virtual reality headset and you’re in a different world altogether. A third dimension. The first thing you notice is the waharoa floating just in front of you, close enough to touch. In te ao Māori, the waharoa is the gateway to the marae. It’s there where you gather with your people to wait for the karanga to welcome you in. When you answer that call, you physically pass under the waharoa.

Likewise, with Whakapī, when you look through the VR headset and enter the waharoa, you are no longer looking at the exhibition, you’re a part of it. The icons aren’t flat, but floating in space together with the wheku. It’s not a Māori world, not a Pākehā world, but a blend of both. It’s cool. My kids loved it.

The name itself, Whakapī, is a play on the term whakairo, which means to carve. Whaka meaning “to make” and iro meaning maggot. In other words, “to be like a maggot”. The name reflects the understanding that carving mimics the behaviour of the maggot, which leaves circular patterns around the edge of the cartilage when eating away at soft-bone tissue. Whakairo, in essence, is the process by which a material is chiselled away to reveal a form. 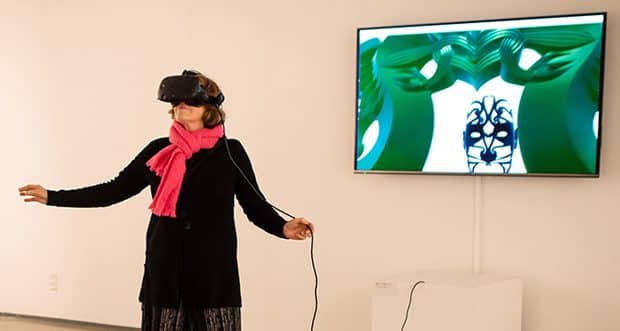 Whakapī, on the other hand, means to “make like a bee.” Rather than taking away from the form, like a maggot, a bee adds to the material, or builds it up. It’s still sculpture, but it’s the inverse way of looking at it. In practical terms, we’re talking 3D printing. This means sculpting digitally. It’s something Kereama has been into for a while but has only really been able to push the boundaries of now, as newer and flasher 3D printers have come online.

Kereama knows that not everyone will be accepting of his work. Within any indigenous culture, there’s always this underlying, thorny question about how to deal with outside influences. How do we protect that which is unique about us? Are certain things tapu, or off-limits?

I’m reminded of the stir caused by the now famous “Mickey to Tiki Tu Meke” painting by Dick Frizzel. Some people didn’t like it, and thought it trivialised Māori culture. Others loved it. Either way, it’s gone on to become one of the most recognisable pieces of contemporary New Zealand art.

It’s always that way, with change. Some people are cautious, holding on to tradition as if it’s the only true key to the future. For others, change is not only inevitable but, sometimes, exactly what we need.

For Kereama, it feels like it’s really a question of innovation. “Some people are going to walk through this exhibition and think it’s wrong, but if you look to our past, you can see we’ve always been innovating. Let’s embrace it. That’s what our tūpuna our did. Why not? Let’s not be afraid to do anything.

“I’ve seen a meeting house with sunflowers painted on it. I’ve seen European sculptures carved on Māori structures. In one wharenui I saw a carved Pākehā figure with cowboy boots on. Our people have always carved images that represented their time. They depicted their world as they observed and experienced it. These things meant something to them. Likewise, I’m creating in a way that means something to me.”

You can see Whakapī at Pātaka until August 13.

This article was sponsored by Pātaka Gallery: A hidden gem in Porirua City tucked between the library, Te Rauparaha Arena and a humming cafe. Pātaka claims to be the only art gallery in New Zealand with a written policy to ensure it will always have at least one exhibition dedicated to Māori art and artists. In fact, it usually has many more.

Kereama Taepa is a multidisciplinary artist of Te Arawa and Te Āti Awa descent. He received a Master of Māori Visual Arts from Toioho ki Āpiti, Massey University in Palmerston North, and currently teaches on the Bachelor of Creative Technologies at Toi Ohomai Institute of Technology, Rotorua. He has exhibited both nationally and internationally, with work in collections in New Zealand and abroad. In early 2016 he installed A (Very) Brief History of New Zealand for the Four Plinths Sculpture Project in central Wellington, the latest of a number of public artworks.